Cryptocurrency markets have been quite bullish the past week. Let’s take a look at a few markets and go over some key levels and speculate on the future of their prices.

This was followed by rejection of higher prices thus placed NEO at $18.06 that is the current price.  Increase in NEO market price has therefore, led to positive impact upon investors. This also shows that investors are holding their asset in anticipation for better price.

There is a high chance of a bullish momentum in the coming few hours as indicated by the 7 day MA that is above the 21 day MA.  The RSI is also heading north, reflecting increase in price momentum. New support should be therefore, placed at $17.85.

XMR/USD pair has been trading on a ragging market in the last 24hrs.  The coin has generally lacked market momentum. XMR began trading at $115.350 (A) that was followed by a strong buying pressure that shifted the price up to $119.820 (B).

A trend reversal pattern is later seen at around 02:00 that change the momentum to the upward direction.  XMR is currently trading at $116.520. 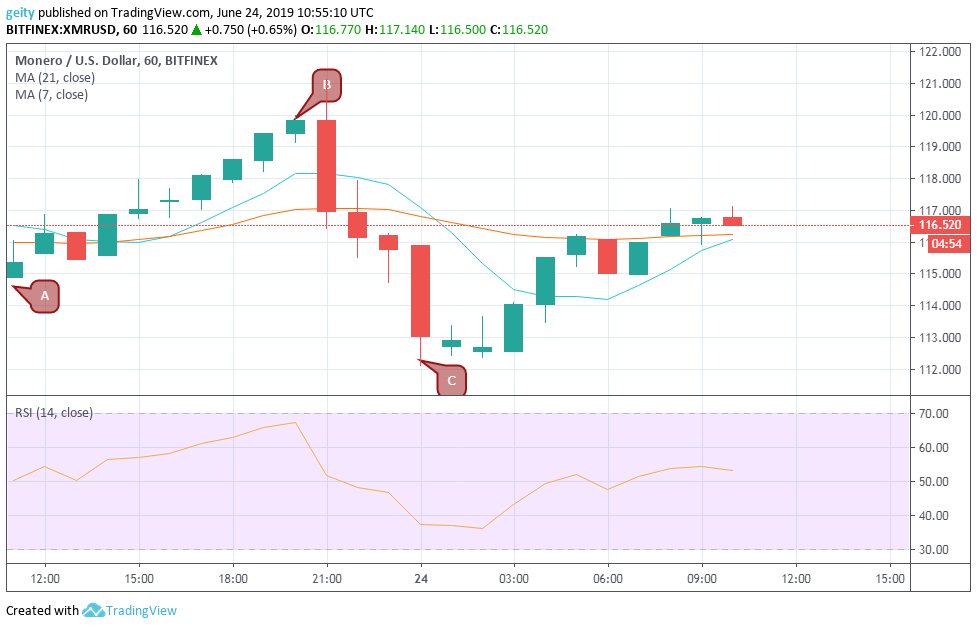 A sideways price movement is likely to seen in the next few hours since the RSI indicator is currently trading flat thus indicating lack of dominance from either buyers or sellers.  New support level should be set at $115.000

BTC therefore began with a strong pressure coming from buyers that resulting to an upward price rally, which pushed the price up to a high of $10750 (B).  Price rejection later followed that dipped the price momentum to a low of $10556.00 (C).

Presence of a Doji pattern is later seen indicating indecision in the market at around 01:00.  This was followed by a bullish engulfing pattern that pushed the price up to close at $10753.13 (D); further price increase is later seen that placed BTC to its current price of $10834.64. 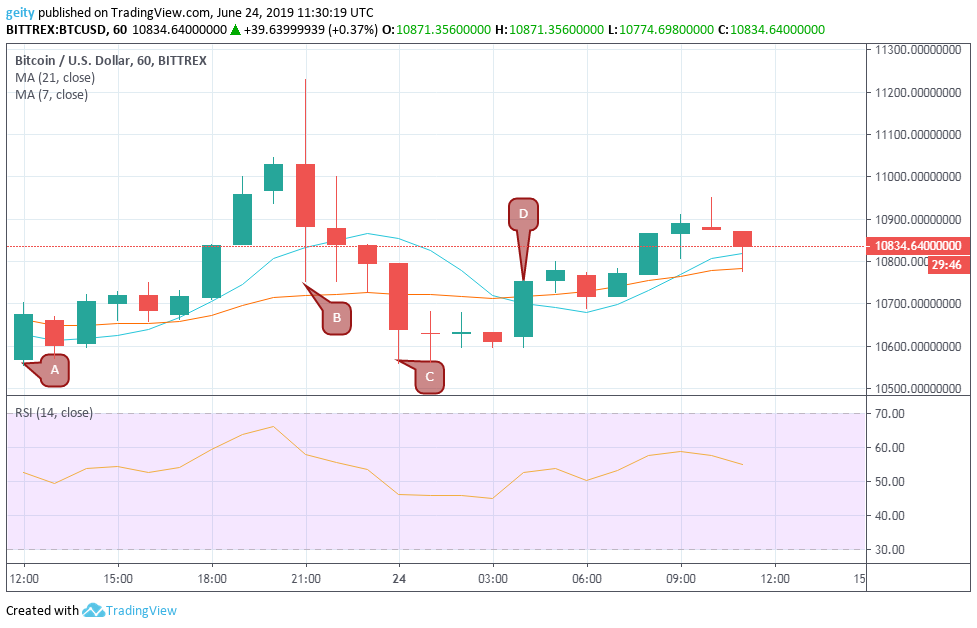 During the last hour the 7 day MA is seen above the 21 day MA indicating that a bullish signal is likely to occur in the next few hours.  New target should be therefore set at $10933.87 and a stop-loss to be set slightly below the target in case of a breakdown.

Disclaimer: This is not trading or investment advice. The above article is for entertainment and education purposes only. Please do your own research before purchasing or investing into any cryptocurrency or digital currency.